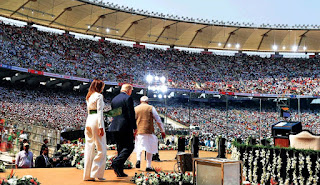 As Prime Minister Narendra Modi gripped US president Donal Trump in a tight hug welcoming him and US First Lady Melania at Ahmedabad airport, the optics were clear: it was pageantry over policy. On day 1 of his two day whirlwind visit, Trump basked in the great Indian show featuring a mega-rally with cheering crowds, a mutual admiration match with his counterpart and a sunset tour of the iconic Taj Mahal.

Trump, Melania, Ivanka and her husband Jared Kusher enjoyed public adulation and even took selfies with visitors in the VIP section.

Trump delivered a populist but commendably researched speech, akin to an English version of what Modi would generally speak or would love to hear. Besides changing into a yellow tie signifying friendship, Trump lavished generous praise on his Indian counterpart.

Modi’s home-state Gujarat known for its hyper nationalism and devotion towards to him, waited for almost five hours in the scorching sun as the cavalcade made its way slowly to Sabarmati ashram.

Motera, the largest cricket stadium in the world was packed to capacity with over 1.10 lakh people. Though Trump was expecting 10 million on the roads of Ahmedabad (he had claimed this in Colorado and tweeted about it), he was happy that the thousands-strong crowd endured blazing temperatures for over five hours to see and hear him.

The Namaste Trump rally in Motera had both Trump and Modi praising each other indulgently. Trump appeared enthused with possibly the largest crowd he had ever drawn in his political career. Mounting praise on Modi, Trump called him a “true friend” and an “exceptional leader” whose rise to leadership as the son of a tea seller was an example of the country’s “limitless potential”.

The whole event took on the atmosphere of one of Trump’s political rallies, complete with an Elton John playlist. And that, aides say, is what Trump was looking for when he agreed to travel 8,000 miles for a night in India: an uproarious reception and the biggest crowd he’s ever drawn.

President Trump drew the loudest applause when he spoke on every country’s right to secure their borders in order to prevent and control radical Islamic terrorism. The crowd when crazy Trump mentioned India’s rival and neighbour, Pakistan, saying that he was working with that country “to crack down on the terrorist organizations” that operate along its border with India, and which New Delhi sees as a mortal threat. “Every nation has the right to secure and controlled borders. The United States and India are committed to working together to stop terrorists and to fight their ideology,” Trump said.

The second biggest cheer came when Trump talked of Bollywood, how it produced over 2,000 films a year and invoked DDLJ (Dilwale Dulhaniya Le Jayenge) and Sholay – films that still ruled American hearts. He also spoke of cricket legends Sachin Tendulkar and Virat Kohli.

Trump said that he and Modi would eventually be making “very, very major” trade deals, but added that they are in the “early stages of discussion.” Modi was “a very tough negotiator,” he joked. But that was the only criticism, if it could be counted as that.

Regarding the religious freedom issue that he promised to discuss with PM Modi, the only thing he said was: “Your nation has always been admired around the earth as the place where millions upon millions of Hindus, and Muslims, Sikhs and Jains, Buddhists, Christians, and Jews worship side by side in harmony.”

Before the Motera event, the Trumps toured Mahatma Gandhi’s home at Sabarmati Ashram, removing their shoes before entering as all visitors do. Trump also sat on the floor and tried spinning cotton on a charkha, the wheel Gandhi promoted as a tool of self-reliance.

Trump also raised eyebrows as he did not mention Gandhi in the visitors’ book he signed, only thanking his friend Modi for the visit.

While folk singers from Gujarat and Kailash Kher performed for the spectators, the blazing sun made things tough for the crowd. Interestingly, all Indian music was stopped before Trump arrived, replaced by American songs and an Elton John playlist.

Trump and Modi repeatedly hugged and Trump said he had travelled 8,000 miles to deliver the message that “America loves India, America respects India and America will always be faithful and loyal friends to the Indian people.” However, his mention of having good relations with Pakistan was heard cautiously by everyone who could understand English in the crowd. However, since over 90 per cent of the crowd could not understand what Donald Trump was talking and were following the Hindi transcription, they unknowingly clapped when Trump spoke of good relations with Pakistan.