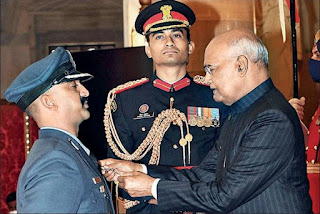 Group Captain Abhinandan Varthaman, who shot down a Pakistani F-16 during the dogfight after Balakot air strikes in 2019, was conferred the Vir Chakra by President Ram Nath Kovind at an investiture ceremony in Rashtrapati Bhavan on Monday.

The Shaurya Chakra awarded posthumously to Major Vibhuti Shankar Dhoundiyal for an operation in which five terrorists were killed and 200 kg explosives seized in J&K in 2019, was received by his wife Lieutenant Nitika Kaul and mother Saroj Dhoundiyal.

India’s pre-dawn air strikes on the Jaish-e-Mohammed facility at Balakot on February 26 in 2019 had led to the aerial skirmish a day later after the Pakistani Air Force launched a counter-attack with a strike package of advanced fourth-generation F-16 and JF-17 fighters, among others, to bomb Indian military targets across the Line of Control.

Varthaman, then a Wing Commander, was among the fighter pilots who scrambled from the Srinagar airbase to intercept the incoming jets. The attempt was thwarted by IAF but Varthaman’s MiG-21 was shot down after he had downed the F-16. He was held captive in Pakistan for three days before being repatriated. “Varthaman showed conspicuous courage, demonstrated gallantry in the face of the enemy while disregarding personal safety and displayed exceptional sense of duty,” said his Vir Chakra citation. Vir Chakra is India’s third highest wartime gallantry medal.