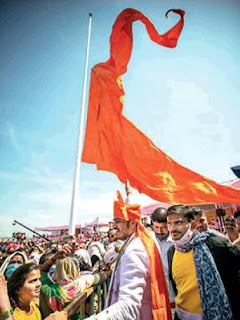 NCP seems to have taken a saffron turn ahead of the local body polls as NCP MLA Rohit Pawar, grand nephew of NCP supremo Sharad Pawar, installed the world’s tallest saffron flag in his constituency of Karjat-Jamkhed last month.

The massive flag, weighing 90 kilogram, is hoisted atop a 74-metre-tall pole which weighs 18 tonnes and has traversed across six states before being installed in Jamkhed. Political observers said the saffron flag was an attempt by the young Pawar family scion to not just make an attempt to experiment with soft Hindutva but also lay claim to Shivaji’s legacy. Rohit said that the flag pole was 74 metres tall since ‘Shivaji Maharaj’s coronation took place in 1674.

“Hindutva can’t be claimed by any party and neither does it belong to any political party. This flag has travelled to 96 holy sites across 36 districts in India. The saffron flag also represents nationalism and has travelled to several religious sites all over India. There is nothing political about it. CM Uddhav Thackeray has already spoken about neo-Hindutva. The saffron flag doesn’t belong to any particular political party,” Rohit said.

The flag is called ‘Swarajya Dhwaj’ or self rule flag. The flag not just relates to Shivaji’s fight for self-rule but is also seen as an attempt at soft hindutva by the NCP ahead of the local body polls. Local historians said one of the Maratha Confederacy’s last battles was fought in Kharda against the Nizam, which the Marathas own. “Kharda in Jamkhed taluka has historical importance. So the flag was installed near the Shivpattan fort here ,” Rohit said.

During the 2019 polls, Rohit won Karjat Jamkhed assembly constituency by over 43,000 votes defeating BJP’s sitting minister Ram Shinde. “Rohit is now seen as NCP’s youth face. The party is expected to gain from his campaign and Swarajya Dhwaj as every family in the hinterland connects to Swarajya and the saffron flag,” an NCP functionary said.