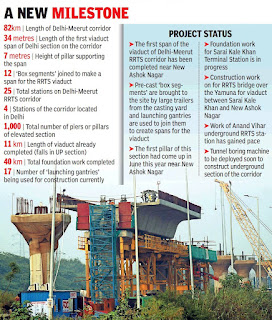 The Delhi-Meerut Regional Rapid Transit System viaduct has started taking shape in the national capital. In a major milestone for the 82-km-long high-speed corridor, the first span of the viaduct of the Delhi stretch has been completed near New Ashok Nagar.

The upcoming New Ashok Nagar RRTS station was also the location where the first pillar of the elevated section of the Delhi stretch of the corridor had come up in June this year. A spokesperson of National Capital Region Transport Corporation, which is executing the project, said that the first constructed ‘span’ was about 34 metres long and had been constructed over pillars that were about seven metres in height.

“The span is being made with the help of ‘box segments,’ which are being precasted at the Ghazipur casting yard,” he said.

“Generally, 12 box segments are used to make a span for the RRTS viaduct,” he said, adding that these segments are brought to the site by large trailers from the casting yard and then installed ‘launchers’ by heavy cranes.

The elevated RRTS viaduct is being constructed using launching gantries, which are installed between two pillars and help join the pre-cast box segments by the process of gluing and stressing, after which these form a span as the part of the viaduct. “The entire process of gluing, stressing, and tying the pre-cast segments by wires onto the slung launcher is conducted under the supervision of infrastructure experts and all safety and security measures are taken care of,” he said.

The Delhi-Meerut RRTS corridor has a total of 25 stations, out of which four are in Delhi and 21 in Uttar Pradesh. The spokesperson said that the foundation work for Sarai Kale Khan RRTS elevated station was in progress and work on the Anand Vihar underground RRTS station was also being done at a fast pace, with the work of launching Tunnel Boring Machine being under process.

The Delhi section starts from Sarai Kale Khan and passes above the existing Barapullah flyover in the way of crossing the Yamuna to reach New Ashok Nagar station. NCRTC is also working on the construction work of RRTS bridge over the river, which would come up parallel to the DND Flyway, for the viaduct between New Ashok Nagar and Sarai Kale Khan.

“All the prescribed guidelines to mitigate pollution are being religiously followed at the RRTS construction sites,” he said.