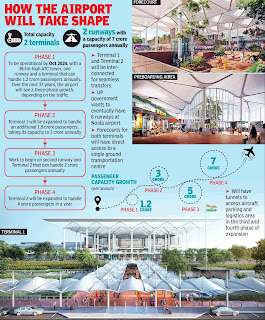 Prime Minister Narendra Modi on Thursday laid the foundation stone for Noida International Airport, paving the way for Delhi-NCR to become the first megapolis in India to have two civilian airports for commercial flights by October 2024.

The airport at Jewar will begin its journey with one runway and a terminal to handle 1.2 crore passengers annually at an investment of Rs 5,730 crore. It will, in subsequent phases, also have a multi-modal transit hub at its “ground transportation centre” – the first for any Indian airport – for seamless connectivity with metro, rapid rail and high-speed rail stations, taxi and bus services and private parking in a multi-level structure.

Modi said NIA will be a “logistics gateway” to north India with a hub for multimodal transport. “Crores of people will benefit from this airport that was first thought of by a BJP government two decades back. After that, this project was almost shelved by subsequent governments both in Lucknow and Delhi. If the airport is delayed now, there is a provision for stiff fines (for the developer),” the PM said at the launch event for the project at the airport site.

Depending on how traffic grows, three subsequent phases of expansion by winning bidder Zurich Airport International over a 40-year lease period will see NIA get two runways and as many terminals that will be able to handle 7 crore passengers annually, which is equivalent to Delhi’s IGI Airport’s pre-Covid (2019) capacity. IGIA, that began as Palam Airport in 1962, is still growing and will reach its peak capacity of 10-12 crore passengers annually before 2030.

“The airport will be ready in three years and change the lives of everyone in the region. It will be a massive boost to the economy in all spheres like agriculture, manufacturing, services and for all walks of society from small farmers to industries here,” the PM said.

For seamless connectivity to other states and IGIA, Noida airport will be linked by various expressways, including the upcoming Delhi-Mumbai expressway. “For a landlocked state like UP, this airport will play the role of a port and ensure farmers and manufacturers of unique items in the region — like brassware of Moradabad, petha and footwear of Agra, furniture of Saharanpur… — get quick access to world markets for their products,” Modi said.

NIA will have a maintenance, repair and overhaul facility spread over 40 acres. “Today, almost 85% of aircraft with Indian carriers go abroad for MRO service, spending about Rs 15,000 crore annually. This Rs 30,000-crore project will change that,” the PM said.

Christoph Schnellmann, CEO of Yamuna International Airport Pvt Ltd, the concessionaire for NIA, said, “NIA will connect western UP to other cities in India and the world. This world-class airport will set a benchmark in aviation infrastructure and development of multiple-airport systems in India.”