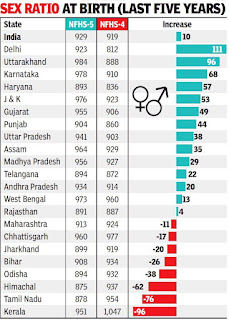 The sex ratio at birth, however, was still worryingly low at 929, indicating continued sex selection at birth, despite an improvement from the previous survey.

The increase in overall sex ratio is a combination of increased life expectancy of women and improvement in the sex ratio at birth or the number of female births for every 1,000 male births. India’s poor sex ratio at birth has been a source of national shame and concern as it indicates a general preference for a male child and also that lakhs of female foetuses are being killed.

The sex ratio data of the NFHS seems to be at variance with that of the census. For instance, according to the 2001 census, India’s overall sex ratio was 933, but NFHS-3 conducted in 2005-06 pegged it at 1,000. Again, the 2011 census found the sex ratio to be 940, but according to NFHS-4 (20015-16) it was 991. Being a sample survey, NFHS data could be less accurate and only the next census would reveal whether there actually are more females than males in India, though both sources show a steady improvement in overall sex ratio.

Sex ratio at birth of just 929 for the five years preceding the latest survey is still well below the mark of 952 that the World Health Organisation estimates as the natural sex ratio at birth.

The practice of sex selection at birth continues to be prevalent in most parts of India with the practice spreading to even parts that traditionally had better sex ratio such as tribal states of Jharkhand and Chhattisgarh and southern states like Kerala and Tamil Nadu. However, some of the states with the worst sex ratio at birth, such as Delhi, Haryana and Punjab, showed significant improvement.

SRB of 929 is a definite improvement over 914 in 2005-06 and 919 in 2015-16, but several bigger states including Kerala, Tamil Nadu, Odisha, Bihar and Maharashtra saw a worsening the ratio since the last survey. These were offset by significant improvement in SRB in a much higher number of large states including Karnataka, Haryana, Gujarat, Punjab, Uttar Pradesh, Assam, Madhya Pradesh, Telangana and Andhra Pradesh. In most states, the sex ratio at birth is lower in urban areas where there is greater access to sex selection technologies. The latest survey, while showing an improvement in both rural and urban SRB, also shows a narrowing of the gap between the two as urban areas have shown higher improvement than rural areas.