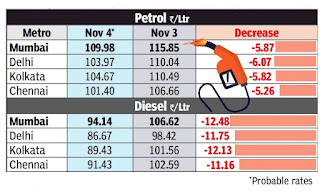 The Centre slashed excise duty on petrol and diesel by Rs 5 and Rs 10 per litre respectively, a move that will offer relief to consumers by lowering pump rates and easing prices of daily staples. The duty cut is likely to reduce petrol price in Mumbai by around Rs 6 a litre and diesel by around Rs 12 from Thursday, assuming retailers don’t raise the base price.

Six states—Karnataka, Gujarat, Assam, Tripura, Goa and Manipur—have effected maximum cut in VAT for both diesel and petrol, reducing it by Rs 7 for both. UP announced an additional reduction of Rs 7 in state taxes on petrol and Rs 2 on diesel. Thus, petrol and diesel will be cheaper by Rs 12 per litre in the state.

The excise duty cut will reduce the opposition’s leverage against BJP over the issue of fuel taxes and price rise. It will, however, leave a hole of about Rs 60,000-65,000 crore in the government’s tax collection in the remaining months of this fiscal. Higher mop-up in other taxes may bridge the gap.

The reduction will vary from one state to another in accordance with the level of VAT levied. States with higher VAT such as Maharashtra and Rajasthan will see slightly higher reduction in pump prices. The higher passthrough is because of incremental decrease in state levy as VAT is charged after excise duty and dealer commission.

A finance ministry statement said the higher excise duty reduction on diesel, the main fuel for the farm and transport sectors, will help farmers in the upcoming Rabi season. It appealed the states, which too had raised VAT when crude prices fell, to match the Centre’s step by reducing VAT for bigger relief to consumers.

“The Indian farmers have, through their hard work, kept the economic growth momentum going even during the lockdown phase and the massive reduction in excise on diesel will come as a boost to the farmers during the upcoming Rabi season,” it said.

Opposition parties, however, slammed the government for not fully rolling back the higher levies which kicked in after the Covid outbreak in 2020. There was criticism that the Centre’s reduction in excise duty will also hit states as they have a 41.5% share in central taxes. Critics suggested that the Centre should have instead reduced the cess which is not shared with the states The Centre had raised the excise duty by Rs 13 on petrol and Rs 16 on diesel between March and May last year when oil prices collapsed due to the pandemic. The two hikes had raised excise duty by 65% on petrol from Rs 19.98 to Rs 32.98 a litre and 79% on diesel from Rs 15.83 to Rs 28.35. The increased excise duty swelled the Centre’s fuel tax collection by 88% in 2020-21 to more than Rs 3 lakh crore in spite of lower sales amid the pandemic. Duty collection from diesel alone had jumped 108% due to higher tax.

As crude prices started rising in recent months, the high taxes amplified the impact and pushed up pump prices to record levels. The record pump prices have been exerting inflationary pressure, the statement said. “The world has also seen shortages and increased prices of all forms of energy. The government has made efforts to ensure that there is no energy shortage in the country and that commodities such as petrol and diesel are available adequately to meet our requirements.”