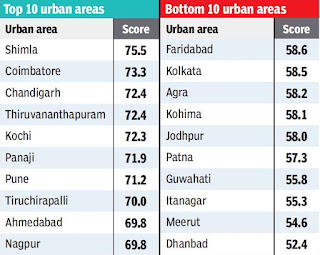 Shimla has topped Niti Aayog’s Sustainable Development Goal index that ranks 56 urban areas according to their progress in meeting SDG goals linked to ending poverty, zero hunger, good health and well being, quality education and gender equality, among others.

Coimbatore and Chandigarh were ranked second and third respectively among the top 10 urban centres, while Dhanbad was the laggard and placed among the bottom 10 centres.

In 2015, the UN General Assembly had set the target of meeting 17 SDG goals by 2030. The latest index measures urban centres in India on 15 out of the 17 goals. Out of the 56 urban areas ranked in the index, 44 are with a population of more one million. The remaining 12 are state capitals with a population of less than a million.