Mumbai: EEH, WEH to be concretised 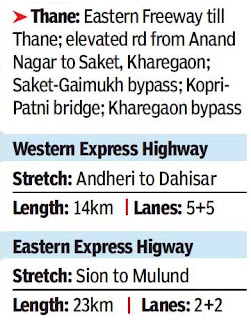 The MMRDA gave its approval to the extension of the Eastern Freeway till Thane and concretisation of the Western and Eastern Express highways.

Motorists using the WEH and EEH are promised a pothole-free experience by 2025 as MMRDA has given its approval to concretise these arterial stretches.

The approval came in the authority meeting chaired by urban development minister Eknath Shinde on Tuesday. Metropolitan commissioner S V R Srinivas said, “We have given approval for concretisation of both these roads.”

MMRDA officials said only a 14km, 5-plus-5-lane stretch of the 26km Western Express Highway will be concretised between Andheri and Dahisar for now. The 10km stretch between Bandra and Andheri will not be taken up now as it has been asphalted and is still under the contractor defect liability period. This stretch will be concretised in Phase II.

On the Eastern Express Highway, only two lanes each on either side of the median will be concretised between Sion and Mulund.

Srinivas said, “On EEH, there are utility lines beneath the main carriageway. Hence, only those lanes are taken which do not have utilities underneath.”

On WEH, the utilities are underneath the service road, hence it is feasible to undertake concretisation on all lanes. Work on WEH will cost Rs 750 crore while EEH expenditure is estimated at Rs 300 crore.

MMRDA will divide the work in 5 stretches so each package has adequate deployment of men and machinery to complete the work in time.

MMRDA has been given the mandate to maintain both EEH and WEH as some stretches on these roads are witnessing Metro-related works.