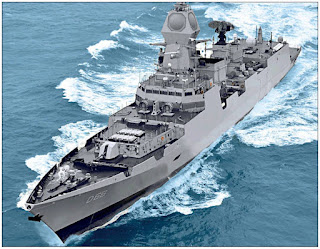 INS Visakhapatnam, a P15B stealth guided missile destroyer regarded as one of India’s most potent warships, is scheduled to be commissioned into the Navy in the presence of defence minister Rajnath Singh at the Naval Dockyard in Mumbai on November 21. The event marks the formal induction of the first of the four 7,300-tonne ‘Visakhapatnam’ class destroyers, indigenously designed by the Navy’s in-house organisation, Directorate of Naval Design, and constructed by Mazagon Dock Limited, Mumbai, for around Rs 30,000 crore. The ship measures163m in length,17m in breadth with a displacement of 7,400 tonnes. Some of the major indigenised equipment/system onboard include Indigenous Medium Range Surface to Air Missiles, Surface to Surface Missiles, Torpedo Tubes and Launchers, Anti-Submarine Rocket Launchers, and Super Rapid Gun Mount, among others.