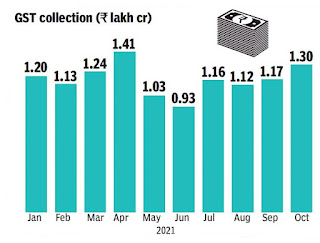 With economic activity stabilising, especially services, the government is hoping that monthly GST collections would stabilise around Rs 1.5 lakh crore over the next few months, helping the overall revenue situation at the Centre and the states.

This would mean that the mop-up will be higher than the record collections of Rs 1.4 lakh crore in April before it slipped to Rs 92,900 crore in June on account of the second wave of the Covid-19 pandemic. Collections in October (for sales in September) were pegged at Rs 1.3 lakh crore, the second highest monthly mop-up.

“Spending has gone up and the collections for October and November are expected to stay strong, if not better than the numbers we just saw,” said a government source. Officials in the indirect tax wing said that it is time for the government to now initiate the next set of measures to bolster collections, suggesting that the current mechanism has nearly reached full capacity.

A group of ministers has already been set up to look at rationalisation of rates, among other things, and officials suggested that some drastic measures, including an increase in rates for some of the items in the 5% bracket was required, if not move the first slab upwards to 6-7%. Besides, they said, there were a whole set of items in the exempted category, which needed to be reviewed as there were several instances where the sellers were misusing the exemptions.

Further, officials suggested that it was time for the finance ministers at the Centre and the state level to look at merging the 12% and 18% slabs and may settle for 16-17% as the standard rate. A couple of years ago, the RBI had estimated the weighted average GST rate at 11.6%, against the estimated revenue-neutral rate of 15-15.5%.

In the past, state finance ministers have avoided discussing the revamp plan and it is unlikely that any decision will be taken until crucial assembly elections in Uttar Pradesh and Punjab, among other states, are over.