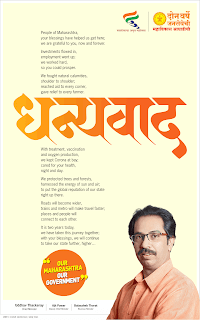 The two years of Maha Vikas Aghadi government have been a mixed bag for infrastructure projects as Metro projects lagged behind targets, while the other big-ticket Mumbai Coastal Road project executed by BMC has witnessed steady progress.

The first Metro line was opened in Mumbai in June 2014 but it has been almost seven years and Mumbaikars are still awaiting the opening of the second one. A senior state government official said, “Pandemic played a major role in disrupting timelines as labour had rushed to their home states, and supply lines got disrupted because of the global nature of the crisis.”

Metro 2A (DN Nagar-Dahisar) and 7 (Dahisar-Andheri via Western Express Highway), which were in advanced stages of completion a year ago, could be opened for commercial operations even though trials commenced on May 31. There has been no solution in sight for the depot for Metro 3 corridor and trials are slated to begin outside the depot in January 2022.

But the pet project of Sena has witnessed decent progress. Despite protests by fishermen in Worli, and some residents in South Mumbai and allegations of corruption by BJP, BMC’s coastal road is making steady progress.

BMC is targeting completion of the 10km coastal road project between Nariman Point and Worli by December 2022 despite a five-month disruption last year. The Rs12,721-crore project was to be completed in four years since commencement of work in October 2018. But BJP MLA Ashish Shelar recently alleged irregularities of Rs 1,600 crore in project. BMC refuted the allegations.

Mumbai Trans Harbour Link too witnessed steady progress as around 70% work on the crucial 22km link is completed.

A senior official said, “In this term, there is also strong push for Sewri-Worli connector as Sena leader Aaditya Thackeray is taking keen interest in this project.” The 17km Versova-Bandra-Sea Link is lagging behind and Maharashtra State Road Development Corporation imposed a penalty on the contractor. The Rs55,000 crore Mumbai-Nagpur super communication highway will be fully completed in December 2022.