Net zero emissions by 2070, a strong pledge by India 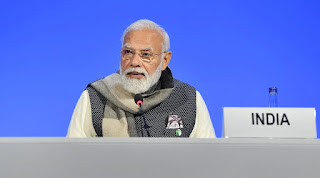 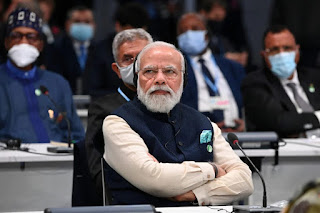 Prime Minister Narendra Modi at the global climate talks in Glasgow announced net zero by 2070 for India. This makes India as one of the last major economies to join the countries committing to net zero goals, climate experts said.

In addition, Modi called on developed countries to dramatically raise their financial help to developing countries for the transition to clean energy and protection against climate impacts.

Responding to announcements made on Monday at World Leaders Summit of a stronger climate target with 50 per cent of its energy requirements to be met by renewables by 2030 and a commitment to cut one billion tonnes of carbon dioxide emissions by 2030, NRDC (Natural Resources Defense Council) president and CEO Manish Bapna said that India is making a vital contribution in the global march against climate change, which disproportionately harms the world’s vulnerable people the most.

“Its bold pledges to cut climate pollution by a billion tonnes, in large part by meeting 50 per cent of its energy requirements with renewable energy by 2030, signals India’s resolute commitment to a healthier and clean future, for the people of India and the world,” he said.

The world’s fifth-largest economy and fourth-largest carbon emitter has set a high bar for stronger climate commitments by key countries at COP26.

PM Modi’s surprise announcement at the COP26 on Monday, committing India to a net-zero economy by 2070 and 50% renewables in the energy mix by 2030, was generally hailed by international experts as one of the key breakthroughs of the Glasgow conference although some expressed disappointment over the 50-year promise.

Climate change expert Nicholas Stern called it a “very significant moment” for the summit. “This demonstrates real leadership… The rich world must respond to Prime Minister Modi’s challenge to deliver a strong increase in international climate finance,” he said, adding that it was a chance for India to show that “it can deliver on both economic development and climate change”.

While not many countries reacted to the announcement, UK PM Boris Johnson, representing the summit’s host government, welcomed the move. “India has today announced ambitious plans for half its energy to come from renewables by 2030. This will cut carbon emissions by a billion tonnes, contributing to a worldwide decade of delivery on climate change,” he tweeted.

However, John Gummer, chair of the Climate Change Committee, a statutory body set up by the UK government, was quoted in the media as slamming India's plans to reach net zero in 50 years’ time, saying it “really won’t do”.

On the other hand, most experts said the commitment was “equitable and just” in the context of India's current stage of development. Said Ulka Kelkar, climate director of the India chapter of the World Resources Institute, “If it is net-zero greenhouse gas emissions, then I would say it’s on par with western commitments. The fair comparison, I would say, is not with the US and Europe as of today, but with the US and Europe of 20 or 30 years ago.”