Delhi: Driverless Operations On Pink Line All Set To Begin By End Of This Year 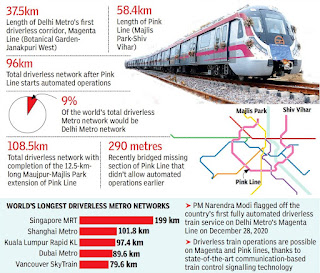 According to sources, DMRC has completed signalling work and the commissioner of metro rail safety will inspect the corridor for unattended train operations this week. Driverless operations in the UTO mode will be possible after a safety go-ahead from the CMRS and it is expected that it will begin by the end of this year.

DMRC took a huge technological leap on December 28 last year when Prime Minister Narendra Modi flagged off the country’s first ever fully automated driverless train service on the Magenta Line. It was expected that driverless operations would also begin on the 58.4-km-long Pink Line in a few months.

However, unlike the Magenta Line, the Pink Line operated as two different sections till recently due to a ‘missing link’ at Trilokpuri where DMRC had been unable to construct a viaduct. The missing link was bridged in August this year and uninterrupted train movement on the entire corridor could finally begin. DMRC has been integrating this section with the rest of the corridor’s state-of-the-art signalling system, which allows automated driverless operations.

When driverless train operations begin on the Pink Line, the total driverless network of DMRC would stand at nearly 96 km, which would be 9% of the world’s total driverless Metro network, according to DMRC. The driverless network would further cross the 100 km mark when the 12.5-km-long Maujpur-Majlis Park extension of the corridor, which is being constructed as part of Delhi Metro’s Phase IV project, gets completed by 2023.

Thanks to the state-of-the-art Communication-Based Train Control signalling technology, driverless train operations are possible in both the Magenta and Pink Lines. Compared with the technology used in older Metro corridors, CBTC allows more efficient and safe train operations.