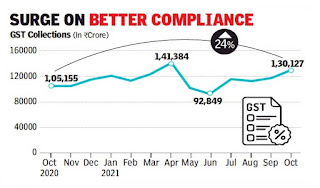 GST collections in October totalled Rs 1.3 lakh crore — the second highest receipts since the implementation of the tax reform in 2017 — with economic recovery strengthening and compliance improving significantly.

GST receipts in October were 24% higher than in Oct 2020, and 36% over 2019-20. Revenues from import of goods was 39% higher, and revenues from domestic transactions (including import of services) were 19% more than revenues in October 2020, the finance ministry said. This is the fourth straight month of receipts crossing Rs 1 lakh crore. The highest collection was in April this year.

“This is very much in line with the trend in economic recovery. This is also evident from the trend in e-way bills generated every month since the 2nd wave,” the ministry said.

The finance ministry said, “This is very much in line with the trend in economic recovery. This is also evident from the trend in the e-way bills generated every month since the second wave . The revenues would have still been higher if the sales of cars and other products had not been affected on account of disruption in supply of semiconductors.”

Since the lifting of curbs after the second wave of the pandemic, revenues have been robust, thanks to the economic rebound. The ministry said the mop-up has also been aided by the efforts of the state and central tax administration, resulting in increased compliance over previous months.

It said that in addition to action against individual tax evaders, this has been a result of the multipronged approach followed by the GST Council. Measures taken to ease compliance include nil filing through text messages, enabling the QRMP system and auto-population of returns. “Overall, the impact of these efforts has ensured increased compliance and higher revenues... more steps to restrict fake ITC (input tax credit) are under consideration of the GST Council,” the ministry’s statement said.

In the past year, GSTN—the IT backbone-—has augmented the system capacity considerably to improve user experience. The council has also taken various steps to discourage noncompliant behaviour.