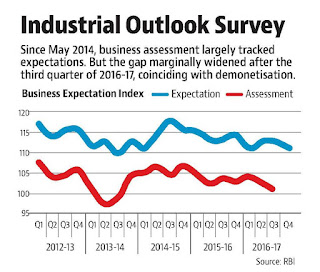 There is rising pressure on Prime Minister Narendra Modi to deliver on his emotive election vow to bring ‘achhe din’, or good times, to Indians.

The Feb.1 budget was a chance for Modi to unveil measures that would fulfil his 2014 guarantee of growth and more jobs, a task made all the more tough by his abrupt decision to drain out 86% of all cash in the economy in his fight against illicit wealth.

It’s also a challenge that is urgent, given that Modi has already crossed the halfway point of his tenure.To his admirers, though, Modi has already made great strides – from reinvigorating the ossified hand of a government system that hobbled progress to biting the bullet on tough decisions needed to pull India’s economy out of a dangerous morass.

Many of his moves on inclusive, accountable governance and a freer hand to bureaucracy have resonated well with Indians tired of a rudderless government mired in corruption scandals and whose indecisiveness had left more than 700 major industry projects in limbo.

Some of that good work is showing.The country’s annualized retail inflation is below the mid-point of the central bank’s target; public finances are better than before with higher income from taxes, monsoon-sown grain production is the highest in at least 14 years and the economy is more open to business than it has ever been. In its first two years, the government cleared more economic reforms – including deregulating diesel prices, cutting cooking gas subsidy and making it easier for companies to exit business – than in the last five years of the previous government. Millions more have been brought into the country’s banking system and the government has pushed digitisation.

In the latest budget, the government also announced incentives to labour-intensive sectors such as clothing and leather along with spending more on projects like roads, railways, low-cost housing and irrigation.

But Modi’s critics say much of this is old wine in a new bottle, minor cosmetic tweaks that haven’t put India on the path of a paradigm shift the prime minister had promised.

Economic growth hasn’t created enough jobs because of lack of investment, income inequality has grown, farm distress has soared and the cash ban has only worsened the economic outlook in the immediate term. Credit to industry remains flat and, despite higher farm credit target, disbursement levels have dipped as banks seek to avoid bad loans.

With mounting debt, poverty, increasing health cost and other ballooning farming-related expenses, farm incomes dropped 50%-70% over the past years. And just farmers hoped to claw back from two years of back-to-back drought, the government ordered a disruptive currency ban that squeezed the largely cash-only agriculture sector.

February’s budget raised the farm credit target to by 11.1% to Rs.10-lakh crore in 2017-18 but, in reality, bank lending to farmers has dropped and the distribution of credit has focussed on a handful of relatively better-off states.

Expenditure on agriculture is seen rising marginally to Rs.2.06-lakh crore in 2017/18, but this in real terms might signal a decline.

Signs of distress are clear in cities as well. Sharp rises in education and healthcare costs in the last two years have hit India’s burgeoning middle class hard, denting Modi’s popularity among the relatively well-off.

Today, India stands before a unique moment in history: It could choose to squander its immense potential with its antiquated socio-political system, corruption and flighty business rules or build on its cultural heritage, democratic values and a young demography to transform the lives of its 1.25 billion citizens.

To begin with, two decades on, nothing less than a $10 trillion economy will secure India’s future, says a recent study by Pricewaterhouse Coopers. It will have to create jobs on a scale that can absorb 10-12 million people who join the workforce every year, including members of the emerging middle class — a billion strong by 2034.