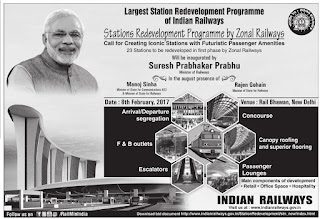 The railways floated tenders for modernisation of 23 stations as part of its ambitious station redevelopment plan. The stations to be modernised include Mumbai Central, the iconic Howrah station and Chennai Central.

Other stations being modernised in the first phase include Lokmanya Tilak Terminus and Bandra Terminus, Borivli, Thane, Pune, Visakhapatnam, Kamakhya, Jammu Tawi, Udaipur City , Secunderabad, Vijaywada, Ranchi, Kozhikode, Yesvantpur, Bangalore Cantt, Bhopal and Indore.The state-run transporter plans to redevelop around 400 stations, which are estimated to attract private investment of up to Rs.1 lakh crore. An official said railways would generate a surplus of Rs.10,000 crore which could be invested in other modernisation programmes.

Stations are being awarded to private developers under the so-called Swiss challenge method, which involves inviting a proposal online and allowing rival bidders to better that proposal. The government will not incur any expenditure as the private developer will rebuild the stations and maintain it for 15 years.