India Most Confident Place for Consumers 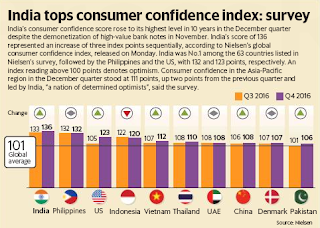 India remained the most confident country in terms of job prospects, personal finance and immediate spending intentions in the fourth quarter of 2016, when the government invalidated high denomination currency notes.

The country's consumer confidence score climbed to 136, up three points from the previous quarter and the highest level in 10 years, according to the latest Nielsen Global Survey of Consumer Confidence and Spending Intentions. The Philippines came second with a score of 132 and the US was third with 123.

Consumer confidence levels above and below a baseline of 100 indicate degrees of optimism and pessimism, respectively, in the online survey conducted by the New York-based research firm.

During the survey period, the Indian government had announced the demonetisation of  Rs.1,000 and Rs.500 notes accounting for 86% of the currency in circulation by value.

However, 17% of the respondents indicated that job security continues to be their `biggest concern' followed by the state of the economy for 16% and terrorism for 14%.

As many as 70% of urban Indians indicated that it's a good time to buy things they want and need over the next 12 months. While 65% said savings are the best way to utilise spare cash, 54% said they would prefer to spend on technology and 53% chose spending on holidays and vacations.