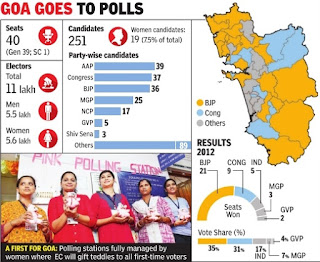 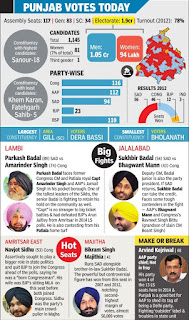 Arch rivals BJP and Congress will battle it out in the electoral arena when polls are held in Punjab and Goa today, with Arvind Kejriwal's AAP, debuting in assembly elections in the two states seeking to play a spoilsport for the two major contenders to power. BJP is in government in Punjab in alliance with Shiromani Akali Dal for two successive terms, while it also helms Goa, despite ally Maharashtrawadi Gomantak Party having drifted away just after the announcement of elections to form a three-party combine.

The elections to Punjab and Goa, which will be followed by those in Uttar Pradesh, Uttarakhand and Manipur, beginning later this month and spilling over to March, are being billed as a major test of BJP and Prime Minister Narendra Modi's popularity post-demonetisation.

In Punjab, 1.98 crore electors are eligible to vote to choose from among 1,145 candidates to elect a 117-member assembly, while 11 lakh voters will decide the fate of 250 nominees for the 40 seats in the coastal state of Goa.

Punjab polls will decide the fate of a number of political bigwigs, including 89-year-old Chief Minister Parkash Singh Badal who is seeking a sixth term in office, his old political rival and Congress's CM face Amarinder Singh and Badal's son and deputy Sukhbir.

Stand-up comedian and AAP MP Bhagwant Mann, who is a probable candidate for chief ministership if the party wins the election, is crossing swords with Sukhbir in Jalalabad.