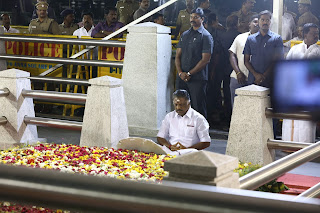 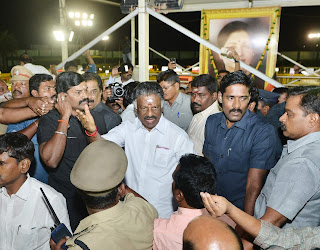 Tuesday in Chennai started with some high decibel dissent against AIADMK general secretary V K Sasikala by senior leader P H Pandian, but what stole the thunder was caretaker chief minister O Panneerselvam's 40-minute silence at J Jayalalithaa's resting place on the Marina beach. Finally, when OPS opened his eyes ­ and mouth ­ Sasikala's power play appeared to have gone horribly wrong.
It was a usual Tuesday evening on the Marina. Beachgoers, couples, walkers and vendors all lazing around by the bay in the balmy breeze till the hum was broken by Panneerselvam's surprise entry . Even before the media could arrive, phones were flashed out and selfies with the man, who was CM till yesterday, in the background were taken.

The day had been one of political mudslinging, with AIADMK founding leader Pandian alleging foul play in the hospitalization and death of Jayalalithaa only to be rebuffed by party veterans K A Sengottaiyan and Panruti S Ramachandran.

Amid the confusion over Sasikala's swearing-in ceremony, the governor's absence from Chennai, Pannerselvam, known as the man who had hitherto taken orders, seized the day by the night.

After sitting cross-legged for more than 40 minutes next to Jayalalithaa's memorial, OPS opened his eyes and started wiping his tears.

He prostrated at the memorial and went around it once before moving out of it. The eerie silence was broken by questions from reporters and pleas from security personnel to keep calm. OPS remained patient till reporters settled down but spoke in an emotion-filled voice to the media.“I was forced to resign,“ he said, and went on to name his colleagues who pulled the rug from under his feet.

After dropping a bombshell late in the night, he left for his residence leaving his cabinet colleagues to fend for themselves.About 200 of his supporters raised slogans extolling him.Songs from popular films of MGR played as supporters rejoiced. State minister for law, court and prisons C Ve Shanmugam was seen at Panneerselvam's heavily-guarded house even as others headed to Poes Garden for a meeting with Sasikala on the future course of action.