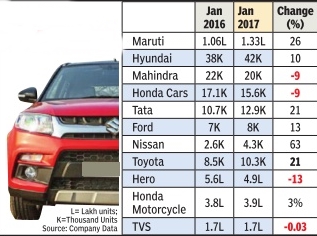 The impact of demonetisation on car sales seems to be waning as a majority of companies, led by market leaders Maruti and Hyundai, opened the new year with a double-digit growth in January volumes.

Hyundai witnessed a growth of 10%, mainly on good response to SUV Creta.

M&M, however, could not report positive growth in January and its volumes slipped by 9%. Honda Cars India also reported decline in sales.

Two-wheeler companies, however, are yet to realise a full recovery as top companies such as Hero MotoCorp continued to witness double digit fall in demand.