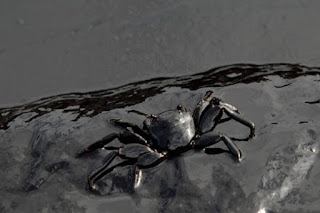 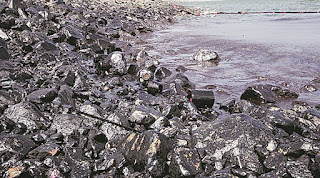 The oil slick floating along Chennai's coast since two ships collided off the Ennore port last Saturday has travelled 32 km south and entered the Palavakkam beach on the East Coast Road. It is likely to travel further south and reach Uthandi by Monday. Nearly 70 tonnes of oil sludge accumulated on the Ennore shore at Ramakrishna Nagar Kuppam beach has been removed by the Indian Coast Guard so far.

The oil spill is predicted to affect another 15 km of the coastline until Kanathur by Monday, according to the Indian National Centre for Ocean Information Services, Hyderabad, which has been tracking the drift pattern of the oil slick along the city coast using computer models.

The oil slick accumulated on the Palavakkam beach is predicted to move south and reach Injambakkam, near the Cholamandal Artists' Village by Friday. By Saturday, it is likely to cross the VGP Golden Beach.

The oil spill trajectory prediction system employed by INCOIS works based on inputs like details of the oil spill, location, date and time of the spill, quantity and type of oil spilled.

INCOIS has found that about 7 tonnes of oil will evaporate each day over the next one week. About 10 tonnes will be beached every day until next week. Meanwhile, an aerial survey by the coast guard has shown that there is no trace of oil in the mid-sea.

On Thursday , the coast guard removed 21.5 tonnes oil using buckets. The super sucker which had been employed over the previous two days could not be operated on Thursday. More than 750 workers and volunteers from the Tamil Nadu Pollution Control Board, marine institutes and NGOs took part in the clean-up.

After Kanimozhi raised the issue in Parliament, a parliamentary standing committee on environment took suo motu cognisance of it and the environment ministry sought a ground report.

She said there was lack of trained persons to deal with such a situation and various wings of the government were not coordinating properly to clear the oil spill which has resulted in destruction of marine life in the area.