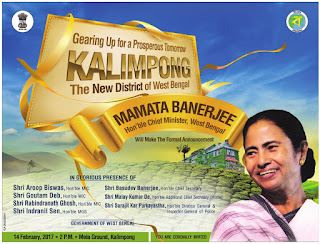 On December 6, 1864, when Kalimpong was annexed by the British rulers and made a part of India, it had spent 152 years under Bhutanese rule.

On Tuesday, another 152 years later, it will be reborn as Bengal's 21st district. It will finally emerge from the shadow of its “big sister“ Darjeeling, of which it was a sub-division all along.

Bengal's newest district is also expected to be its most sparsely populated with 49,403 people (according to the 2011 census) inhabiting 1,056 square kilometer area. The same census pegs Darjeeling district's population at 9.37 lakhs (total area of the district being 3,149 square kilometer).

As chief minister Mamata Banerjee's motorcade winded its way into the soon-to-be district headquarters, it seemed she waded into festivities, which had already began. Such was the exuberance that the chief minister ­ much to the anxiety of her security personnel ­ had to step down no less than seven times.

The political underpinnings of the move, coming close on the heels of forming no less than 15 development boards by the Mamata Banerjee regime -including one for the Gurungs -however can't take away the fact that the district formation will also bring relief to geographically-remote hamlets in the subdivision etched between Nepal and Bhutan. For example, to reach Kalimpong's remotest polling booth, Tangta Primary School one needs to travel 156 kms by vehicle and then a further 10 km by foot.