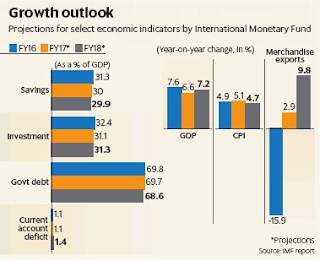 Cash shortage and payment disruptions caused by demonetisation have undermined consumption and business activity and poses a new challenge to sustain the growth momentum in India, the International Monetary Fund has said and called for quick restoration of availability of cash to avoid further disruptions.

IMF has supported government's efforts to clamp down on illicit financial flows, but noted the strains that have emerged from the currency exchange initiative. It called for prudent monitoring of potential side-effects of demonetisation on financial stability and growth.

It said supply of new banknotes in the first month after the demonetisation initiative was insufficient, even as authorities took multiple steps to ease the currency situation.

IMF mission chief for India Paul Cashin said the demonetization initiative presents an opportunity to increase size of the formal economy and broaden financial intermediation in the long term and can also support widening of the tax base, help reduce fiscal deficit, enhance bank liquidity , and give a fillip to government's efforts to promote greater financial inclusion.

He said the government has made significant progress on important economic reforms, which will support strong and sustainable growth going forward. Cashin said implementation of GST, which has been in the making for over a decade, will help raise India's medium-term growth to above 8%, as it will enhance efficiency of production and movement of goods and services across states.