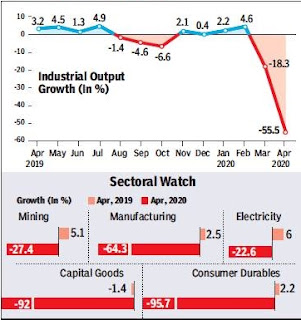 India's industrial production posted its sharpest ever contraction in April, declining 55.5%, dragged down by a fall across sectors, with manufacturing plunging 64.3% as the impact of the national lockdown to stem the spread of the deadly coronavirus halted economic activity.

The National Statistical Office did not release the headline numbers for any of the sectors and provided only the index numbers. It said that several units had reported nil production.

“Consequently, it is not appropriate to compare the index of industrial production (IIP) of April, 2020 with earlier months and users may like to observe the changes in IIP in the following months. These quick estimates will undergo revision in subsequent releases as per the revision policy of IIP,” the NSO said in its release. The agency also revised downwards the number for March, to a contraction of 18.3% from the earlier decline of 16.7%.

The April data showed that all the sectors were hit hard by the stalling of economic activity. The Indian economy is expected to contract sharply in 2020-21 due to the impact of the lockdown and the latest forecast from the World Bank is a 3.2% fall with a rebound expected next fiscal year.

The country’s chief statistician Pravin Srivastava cautioned against comparing the April IIP numbers with the previous months. “It should not be compared because we had a peculiar situation due to the lockdown and therefore any comparison would be meaningless. If any comparison needs to be done it should be done from April 2021onwards,” Srivastava said. 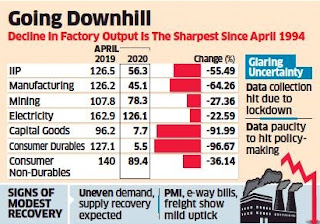 Former chief statistician Pronab Sen agreed but said the IIP statement should have been more open. “I was expecting this to happen as, due to lockdown, offices were closed and there was no data coming in. It is bad to compare and I expect this situation to continue for May as well,” said Sen.

The NSO also released partial data for May retail inflation. The price of only those items were included which have been reported from at least 25% of markets, separately for rural and urban sector and constituted more than 70% weight of the respective sub-groups/groups, the NSO said. The food and beverages inflation moderated in May 2020 to 7.4% compared with 8.6% a month ago, while the food inflation based on the consumer food price index moderated from 10.5% in April to 9.3% in May, largely led by dip in vegetable prices.