Mission Begin Again: Maharashtra opens up in phases this week 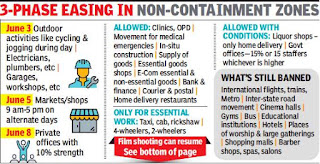 As the fourth phase of the lockdown ended, the Maharashtra state government said that all markets, market areas and shops, except malls, will be allowed to open this week on an odd-even basis in non-containment zones.

The announcement came a day after the Centre announced significant relaxations under Unlock 1 and extended the lockdown till June 30.

For the “staggered, careful and measured” opening, titled Mission Begin Again, the state government has placed a number of conditions

The night curfew timing will be changed to 9 pm-5 am; it’s currently 7 pm-7 am. Doorstep distribution of newspapers will be allowed from June 7.

Although these activities will be permitted in the red zones of Mumbai Metropolitan Region, as well as Solapur, Pune, Aurangabad, Malegaon, Nashik, Dhule, Jalgaon, Akola, Amravati and Nagpur, they will not resume in containment zones.

In a televised address, CM Uddhav Thackeray said Mission Begin Again “is aimed at restarting our lives again”. “But even as we begin afresh, we have to take cautious steps,” he added. He said the number of cases may swing in the next 15 days, but if people following the rules strictly, the figure can be contained.