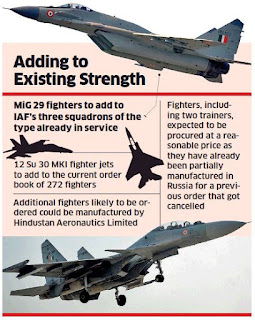 The Indian Air Force is going ahead with plans to order 33 additional fighter jets from Russia, with the proposal expected to be taken up for clearances by the Ministry of Defence shortly. The government-to-government procurement has been in the works for more than a year and would add to the force’s depleting squadron strength.

The IAF is seeking to urgently procure 21 additional MiG 29 fighter jets from Russia to add to its three squadrons of the type already in service. These fighters, which include two trainers, are expected to be procured at a reasonable price as they have already been partially manufactured in Russia for a previous order that got cancelled.

Sources said additional MiGs would cost around ₹5,000 crore and deliveries could start in a couple of years after the order is placed. These fighters, if ordered, would come handy to replace the ageing MiG 21squadrons that are to retire within the next five years. Commercial negotiations have been on since last year to take the contract ahead and the offer would now need to be cleared by the defence ministry’s procurement body.

Besides the MiGs, the Air Force is also set to go ahead with an order for additional Su 30 MKI fighter jets, to add to the current order book of 272 fighters. The 12 additional fighters likely to be ordered could be manufactured by Hindustan Aeronautics Ltd (HAL), which has a production facility at Nasik that will run out of orders by next year.

The Sukhoi’s form the backbone of the IAF and are due for an upgrade that is being negotiated separately with HAL. These 33 fighters would be the first jets to be ordered after the Rafale deal inked in 2017 and would add to the combat capabilities of the air force.

In addition, the Air Force is also likely to place an order for 83 Tejas Light Combat Aircraft Mk 1A this year with HAL that is valued at over ₹38,000 crore — the biggest ever Make in India project of its kind.