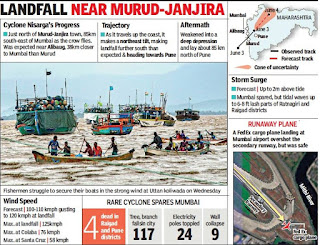 As Cyclone Nisarga made landfall on Wednesday, the wind speed was not as intense as expected in Mumbai, where a red alert had been sounded and thousands evacuated from the shores and low-lying areas. According to IMD, the maximum speed recorded at Colaba was 76 kmph and 58 kmph at Santa Cruz. Fortunately, no serious storm surge was also recorded.

Private forecasting agency Skymet Weather Services confirmed Mumbai had escaped the fury of the cyclone. “In case of Mumbai, we were expecting wind speeds to touch 100-110 kmph, but with the storm having gone further south than Alibaug, the maximum wind speed dropped. For Mumbai, it was like the usual monsoon rains and by evening, the intensity of the cyclone had started reducing,” said Mahesh Palawat, VP, meteorology and climate change.

The change in track took Cyclone Nisarga close to Pune and Ahmednagar, bringing intense rain, strong winds and associated damage to property. Scientist Shubhangi Bhute from IMD said by Wednesday evening, the storm had travelled northeast towards Madhya Maharashtra and headed for MP. It had lost intensity, turned into a deep depression and lay centred 85 km north of Pune late on Wednesday.

“One can definitely see how the impact for Mumbai was less than expected and more so because the cyclone continued to struggle as it could not build up its intensity. It started to weaken before landfall and its eye was also seen to be shrinking. Still, this is a big lesson for Mumbai because had the cyclone moved northwards, it would have affected the city badly,” said Akshay Deoras, an independent meteorologist who is a PhD student at the Department of Meteorology, University of Reading, in UK.