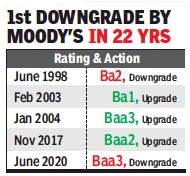 The downgrade by Moody’s comes 22 years after it lowered India’s rating on June 19, 1998 in the aftermath of the country’s nuclear tests. The lowering of the rating — from Baa2 to Baa3 — brings it on a par with S&P and Fitch which rate India at BBB (minus), the lowest investment grade.

The downgrade comes against the deterioration in the country’s growth prospects as the national lockdown unveiled to stem the spread of the Covo-19 pandemic has stalled economic activity. This has also choked revenues, including those from GST prompting the government to raise its market borrowing sharply which economists say will widen its fiscal deficit to around 5.5% of gross domestic product. Moody’s action is likely to put pressure on the rupee, raise borrowing costs and dampen investor sentiment which is already stretched due to the impact of the pandemic on all major global economies.

“While today’s action is taken in the context of the pandemic, it was not driven by the impact of the pandemic. Rather, the pandemic amplifies vulnerabilities in India’s credit profile that were present and building prior to the shock, and which motivated the assignment of a negative outlook last year,” the agency said.

“Slow reform momentum and constrained policy effectiveness have contributed to a prolonged period of slow growth, compared to India’s potential, that started before the pandemic and that Moody’s expects will continue well beyond it,” Moody’s said. The agency said GDP growth has declined from a high of 8.3% in fiscal 2016 (ending March 2017) to 4.2% in fiscal 2019 and expects India’s GDP to contract by 4.0% in fiscal 2020 due to the shock from the coronavirus pandemic and related lockdown measures, followed by 8.7% growth in fiscal 2021 and closer to 6.0% thereafter.

It said that thereafter and over the longer term, growth rates are likely to be materially lower than in the past.