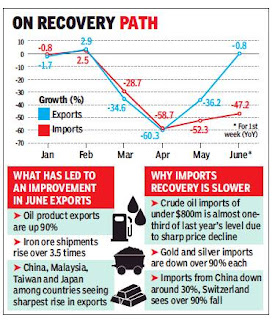 After steep double-digit declines for three months, India’s exports are estimated to have dropped by just 0.8% during the first week of June due to a spike in the value of shipments to several Asian countries, led by China, amid indications of a pick-up in economic activity.

Although the initial signs of improvement may be on account of bunching of shipments, there are other indicators, such as a jump in the number of e-way bills for goods transported within the country, which point to more manufacturing and services activity as the economy recovers from the lockdown.

Against a daily average of 13 lakh e-way bills in March, the number rose to 14.4 lakh on Monday, which is around 70% of the February average.

The government is, however, more surprised with the improvement in exports, which were estimated at $5 billion during the first week of June. During May, exports are estimated to have declined by around 36% to $19 billion, after a 60% drop in April. In the initial days of June, petroleum product exports to China and Singapore were cited as one of the reasons for the improvement with fuel shipments estimated to have jumped nearly 90% to $717 million in the first week of June.

Export of iron ore, probably to China, soared nearly three-and-a-half times to $100 million. In value terms, it was pharmaceuticals and chemicals that were bigger with export of the two product categories estimated to have gone up around 17% to over $400 million each.

There is, however, bad news on the imports front, which are estimated to have declined by a massive 47% to $4.9 billion — leaving the country with a marginal trade surplus of around $125 million. The fall was led by crude oil, whose shipments fell 65% to $788 million and gold, down 94% to $51 million.

The spurt in exports to China along with a 30% decline in imports from across the border have meant that the trade deficit in the initial days of June has narrowed from over $1 billion to around $400 million.

But with three weeks still to go, the numbers will undergo major changes.