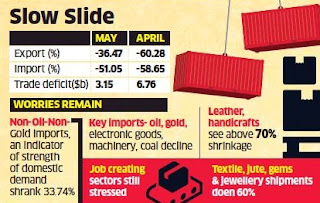 The pace of contraction of India’s exports slowed in May as relaxations in the lockdown to contain the Covid-19 pandemic led to some pick up in economic activity.

The government expects the trend to improve in June on the back of some early indications.

Exports in May shrank 36.47% to $19.05 billion against a 60% contraction in April, which was largely due to overseas orders’ cancellation.

Trade deficit narrowed to $3.15 billion in May as the contraction in imports was sharper. The previous low for trade deficit was March 2016 when it was $2.18 billion.

Merchandise exports recovered faster than imports but among major items of export, only rice, spices, iron ore, drugs and pharmaceuticals recorded positive growth in May.

Rating agency ICRA said in a note that merchandise exports recovered faster than imports, recording a sharp month-onmonth expansion of 84% as compared to 30% for the latter, suggesting that the easing of logistical issues may have accelerated shipments of inventory even as labour availability remained an issue in some areas.

India had announced a three-week nationwide lockdown on March 25, which was extended four times with some relaxations and finally lifted from June 1.

Commerce and industry minister Piyush Goyal has said that exports in the first week of June are at a par with what they were in June 1-7, 2019 and that he expects the contraction to narrow to 8-10% in June. Exports in June 1-7 stood at $4.94 billion as against $5.03 billion in the year-ago period, a marginal dip of about 0.76%.