Forex Reserves Closing in on $500-B Mark 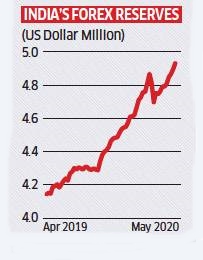 India’s foreign exchange reserves are likely to touch the magic half-a-trillion mark for the first time in the next few weeks as robust foreign fund flows amid a raging pandemic drives the country towards a momentous milestone.

India has already leapfrogged Russia and South Korea to become the third-biggest holder of reserves after China and Japan, and will consolidate its position further when it reaches the $500 billion mark. The rise caps a remarkable journey for a country which in 1991 came close to defaulting on foreign debt and was forced to pledge gold reserves to raise money. More recently, in 2012/13 with reserves at $259 billion, and enough to fund only seven months of imports, India was battered by the global financial market turmoil and was part of the group of ‘Fragile Five’ countries that suffered most from the panic. Current reserves at $493 billion is enough to fund 17 months of imports.

The expansion in reserves comes amid the global pandemic that has caused both financial market and economic turmoil. India’s case has been helped by a pickup in foreign fund flows after the sharp drop-off in March and foreign direct investment.

Share sales by Kotak Mahindra Bank and Bharti Airtel have also helped. Reliance Industries’ massive rights issue and its sale of stake in Jio Platforms to a slew of foreign investors that raised nearly ₹1 lakh crore is expected to further boost flows.

S&P’s decision not to change India’s rating and outlook is also expected to improve global fund flows into the country.

During major financial crises, such as the 1997 Asian crisis or the 2013 taper tantrum, India had to come up with special deposit schemes to lure US dollars. This time round, dollar reserves are comfortable enough for the central bank to act on its own to defend the currency. India’s foreign exchange reserves touched $493 billion on May 29, up $18 billion since March. With foreign investors pouring in ₹19,239 crore ($2.55 billion) so far in June, it is poised to touch $500 billion soon. India has come a long way since its twin deficit crisis in 2013. Its current account deficit, the excess of imports over exports, in April-December 2019 was 1% of GDP. During the worst period of 2012/13, it was 4.82% of the GDP.