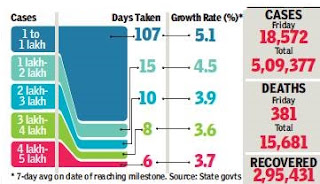 India raced past the 5 lakh mark in Covid-19 cases on Friday, just six days after the country’s caseload crossed 4 lakh, even as the day’s fresh infections touched another new peak —surging past 18,000 for the first time.

There were 381 deaths from the virus on Friday, the first time in four days that the toll had dipped below 400. The country has so far recorded 5,09,377 Covid-19 cases and 15,681 deaths, while over 2.95 lakh patients have recovered, according to the data collated from state governments.

The pandemic continued its surge in the country, with 18,572 new cases being reported on Friday, easily surpassing the previous day’s record of 17,870. This was the seventh new peak in daily cases reported in the past eight days.

Delhi recorded 3,460 fresh coronavirus cases on Friday, taking the tally in the city to over 77,000, while the death toll from the disease mounted to 2,492. On Tuesday, the national capital had reported the highest single-day spike of 3,947 cases. On Wednesday, Delhi had eclipsed Mumbai as the city worst-hit by the pandemic in the country.

Sixty-three fatalities have been recorded in the last 24 hours, a Delhi health department bulletin said on Friday.

The big surge in cases in the twin states of Telangana and Andhra Pradesh still continues.