Fire at Assam Oil Well may Take 4 Weeks to Control 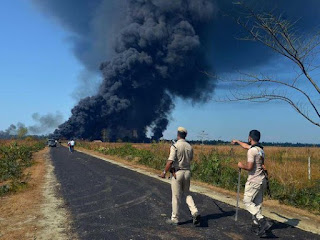 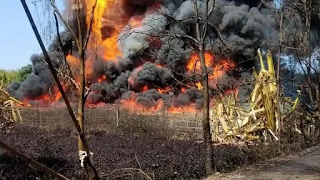 An oil well in Baghjan in Tinsukia district of Assam, where a blowout occurred last month, exploded into a massive inferno on Tuesday, injuring one worker and razing houses in a nearby village. Oil India, field operator, said it will take at least four weeks to douse the fire. One person engaged in repairs sustained injuries, it added.

The incident triggered protests in the area and an irate mob damaged a couple of Oil India’s vehicles. Oil India has asked local administration officials to help maintain law and order so that experts can reach the site and start operations to control the fire. Company officials in nearby areas are being evacuated, it said.

“While the clearing operations were on at the well site, the well caught fire. There is no casualty reported,” Oil India said in a statement. “Fire tenders are at the site controlling the spread of fire… the current situation would be brought under control by the experts.”

According to Oil India, experts from Singapore-based Alert Disaster Control who visited the site said that the environment is now safe for working and they are confident that the situation can be controlled and the well can be capped safely.