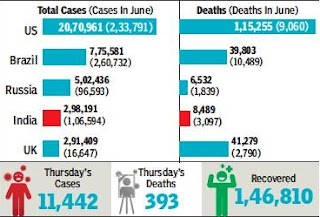 India’s Covid-19 cases climbed to the fourth highest in the world, overtaking the UK on Thursday, even as the country reported another highest single-day rise in new infections and deaths. The number of fresh cases crossed 11,000 for the first time while deaths were close to 400, having gone past 8,000 in all a day earlier. By Thursday night, India had 2,98,191 cases, as per data from state governments.

The country added a record 11,442 cases during the day.

Thursday’s surge in cases as well as deaths was mainly on account of a big spurt in the three worst-hit states of Maharashtra, Tamil Nadu and Delhi. Both Maharashtra and Delhi reported their highest single-day count of fresh cases as well as deaths, while Tamil Nadu reported its second-highest jump in infections and the highest deaths in a day. In Delhi, the death toll due to Covid-19 crossed the 1,000 mark to reach 1,085 on Thursday with 101 more fatalities being confirmed by the state health authorities.

Tamil Nadu reported 23 deaths on Thursday, its highest single-day toll.Gujarat reported 38 deaths while the number of new cases zoomed to the state’s single-day highest of 513.