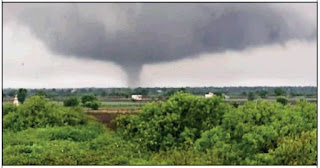 A tornado in Bhaur village of Vaijapur taluka in Aurangabad district, coinciding with the landfall of Cyclone Nisarga on Wednesday evening, as seen in a still from video clip. While tornados are common in countries like the US, this was only the second such sighting in recent times in Maharashtra. The earlier one was seen near Jejuri, close to Pune, in 2018. Meteorologist Kirankumar Johare, who got the video clip of Wednesday’s phenomenon from villagers, said the tornado had formed in Bhaur and moved towards Kopargaon in Ahmednagar district with an overall survival period of around half-an-hour.