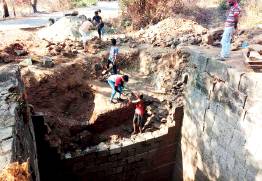 Instead of losing their days in lockdown to screen time, a group of 30 college students and youths have toiled for over a month to restore a 400-year-old step-well at Nesave, a village in Maval taluka.

The work involved collecting and putting back the carved rocks of the well’s wall that had been stolen and taken away to neighbouring areas, removing the foliage that covered the well, nestled as it is in a jungle, cleaning the lost water body of its silt and all other junk it had been filled with over the ages. The meticulous restoration is far from complete though and will have to wait for the monsoon to end, before it can be assembled to it old glory.

The youths, from different colleges at Kamshet and adjacent villages, worked between April 22 and May 31 diligently, managing to gather all the missing stones of the step-well. They also found a temple buried under some debris, clearly ravaged by infiltrators and also negligence of modern authorities.

“We took police permission to do the work and maintained social distancing through the exercise. Each of us contributed according to our capacity. We first got rid of the overgrowth around the well. Then emptied it of silt that had collected over the centuries. In the process, we also uncovered some hidden treasures and idols,” recounted Chinmay Gaikwad, a student doing his Bachelors in Computer Science at Lonavala.

Another volunteer, Shankar Gaikwad, who works with Tata Motors, explained, “We collected all the stolen carved rocks belonging to the well. Locals offered us free transport for the job. We will continue with this task even pursuant to the lockdown. Over 10 tonnes of silt were removed. As we see it, going forward, the step-well will not only serve as tourist attraction but also become a source of water in summer.”

The place was not only subject to the ravages of time but also modern day incursions. “We found many a liquor bottle when moving the rocks. There were also old photo frames and other wastes inside the well. Some of us even got injured extricating these things, but we persevered with the task,” said Sanjay Katke, a student.

“We estimate that the well belongs to Chhatrapati Shivaji’s era and is likely to be of historic significance. A similar well was found at Khandshi, another village in Maval, which had manuscripts etched on it. Seeing the enthusiasm of these local students, we extended our logistics support to them,” said Raj Balshetwar, member of Sahyadri Pratishthan, Pune.

Delving into the structure of the step-well, he added, “It has a leak-proof construct, with carved steps embellished with idols of Shiva, Nandi and Ganesh, besides Mahirap. This shows that it is not a mere well but a Maratha style Pushkarini. We’ve invited some historians to dig up some literature on this heritage structure through research. There are major forts located all around Nesave. The village was located on the ancient route connecting the Ghats to the Konkan region. This Pushkarini must have been a major source of water for soldiers, travellers and horses.”