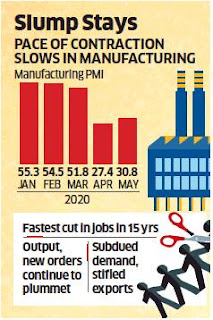 India’s manufacturing activity contracted sharply in May, marking the second consecutive month of steep fall after the record decline in April, as the nationwide lockdown imposed since March 25 dented demand. Firms cut jobs at the quickest pace in over 15 years.

The seasonally adjusted IHS Markit India Manufacturing Purchasing Managers’ Index rose to 30.8 in May from 27.4 in April. A reading above 50 on the index indicates expansion. The data was collected from May 12 to 22 across around 400 manufacturers.

“The latest PMI data suggested that Indian manufacturing output fell further in May,” said Eliot Kerr, economist at IHS Markit. The government has gradually relaxed lockdown and most activities are being allowed, but state and district restrictions remain across most of India.

As per the report, demand weakness was reflected in a continued fall in new orders placed with goods producers due to prolonged closures coupled with weak demand from international markets. Anecdotal evidence suggested that global measures to stem the spread of Covid-19 continued to stifle exports, it said.

Official data released last week showed India’s gross domestic product grew at its slowest pace in 11 years in the fourth quarter and FY20 as the Covid-19 crisis took hold in March, adding to pressures on an already slowing economy. Manufacturing shrank 1.4% in the fourth quarter.

“India’s economic vitals will continue to flash red for some more time, and a return to normalcy may only start to be seen through from Q3 2020,” said Rahul Bajoria, chief India economist at Barclays. Lower production requirements saw Indian manufacturers continue to reduce worker numbers in May.