Mumbai Set For Rain Lash As Nisarga Bears Down 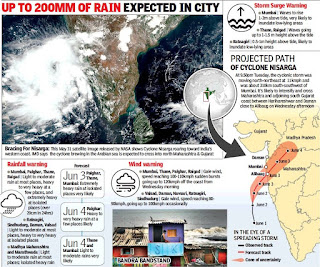 Cyclone Nisarga was on course till Tuesday evening to pass over Mumbai. “For now, it shows that Mumbai is falling on the existing track of the storm (Nisarga) and, therefore, evacuation may be required in some areas. This is also considering that the radial distance between Alibaug and Mumbai is not much. The city is expected to witness a rainy day all throughout Wednesday and the remnants may even be witnessed on Thursday,” said K S Hosalikar, deputy director-general (western region), IMD. It was only in Tuesday’s national bulletin that IMD officially named the storm ‘Nisarga’.

The civic administration on Tuesday asked for equipment at construction sites to be secured to prevent accident and the police to remove temporary sheds erected on roads for nakabandis as the metal barriers could fly off due to the strong winds. In a marathon meeting, municipal commissioner I S Chahal asked ward officers to shift Covid patients put up in temporary structures.

Cyclones hitting Maharashtra is not common, as most that develop in the Arabian Sea either veer northwest to the Arabian peninsula or travel further up till Gujarat. On November 11, 2009, however, Cyclone Phyan had smashed into the Maharashtra coast, causing extensive damage to property.

As Raigad braces for a rare cyclone landfall, two NDRF teams were sent. Two additional NDRF teams were sanctioned for the Alibaug coast on the district collector’s request. Accordingly, three NDRF teams, with 22 personnel in each team, will be deployed in Alibaug taluka, said Raigad district collector Nidhi Choudhari. “We have evacuated around 5,000 people in Alibaug, Uran, Murud and Shrivardhan talukas as they were residing in ‘kuccha’ houses,” she said.

Off the coast, big cargo vessels, offshore supply vessels of ONGC and other ships have been moved out as the Mumbai Port Trust and JNPT issued cyclone alerts once the IMD flagged signal number 5, which meant the port will experience severe weather.

Akshay Deoras, an independent meteorologist who is a PhD student at the Department of Meteorology, University of Reading, in UK, felt the storm is struggling to intensify. Its impact is likely to look like a “vigorous monsoon day for Mumbai” and may be a concern, especially for those who live along the coast in ‘kaccha structures’.