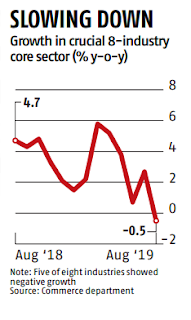 India’s core sector output contracted 0.5% in August after growing 2.7% in July, marking the lowest point in growth since April 2015 and reinforcing the slowdown that the economy is facing.

The contraction, as per commerce and industry ministry data released, suggests lack of any recovery in the second quarter after GDP growth plunged to a six-year low of 5% in April-June. It could lead the Reserve Bank of India to cut rates further when it reviews its monetary policy later this week.

The eight infrastructure industries of coal, crude oil, natural gas, refinery products, fertiliser, steel, cement and electricity have a 40.27% weight in the index of industrial production. Low core sector growth suggests moderation in industrial growth from better-thanexpected 4.3% in July. Economists expect IIP growth to be anaemic in August and even fall below 1%.

RBI is expected to cut its key policy rate by 25 basis points (one basis point is one-hundredth of 1%), following the 110 basis points cut already announced in 2019 so far.