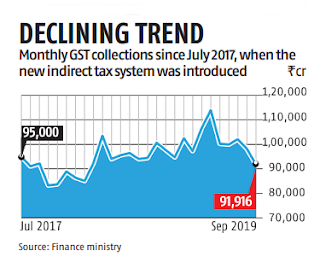 The Goods and Services Tax collections declined 2.67% year-on-year to ₹91,916 crore in September, the lowest in 19 months, bearing the brunt of the slowing consumption demand.

Experts said the latest official data is indicative of the slowdown faced by the economy.

During the April-September period, domestic collection of GST grew 7.82% from the year ago period, but GST on imports declined in the first half of the fiscal. The total GST collection has grown 4.90% year on year.

Economists said this adds to pressure on the fiscal.