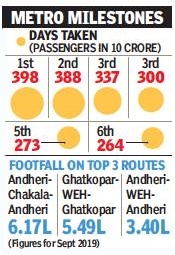 Over five years after it began operations in June 2014, Metro One (Versova-Andheri-Ghatkopar) crossed the 60-crore ridership landmark.

The 12-km-long corridor is an important east-west connector as it connects Western Railway in Andheri to Ghatkopar on the Central Railway via Andheri-Kurla Road, which has emerged as an important business district.

R-Infra-promoted Metro One Pvt Ltd, which operates this corridor, stated every additional 10 crore is noteworthy as the number of days it takes to reach the milestone has been consistently decreasing.

An MMOPL spokesperson said, “The impressive growth in commuters is attributed to our persistent efforts to provide safety, security, cleanliness, reliability and comfort to our commuters.”

One of the major reasons for people switching to Metro is the average road travel time from Ghatkopar to Versova is drastically cut from 120 minutes to a little over 20 minutes.