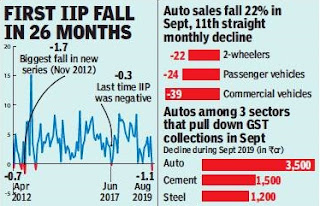 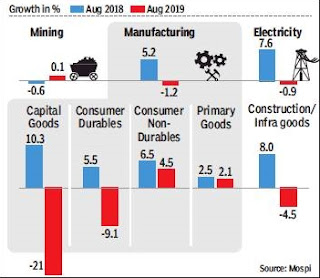 India's industrial output slumped the most in nearly seven years and contracted for the first time in over two years. The slump, led by a sharp decline in the crucial manufacturing, capital goods and consumer durables sectors, poses a fresh challenge for policymakers already battling an economic slowdown.

The index of industrial production fell an annual 1.1% in August, compared with growth of 4.6% in the previous month and 4.8% in the year-earlier month. This was the sharpest contraction since the 1.7% decline recorded in November 2012.

The latest factory data adds to the string of other numbers, such as slumping vehicles sales, which are testimony to the slowdown that has gripped Asia’s third-largest economy, leading to a rash of growth downgrades by several economists, rating agencies and the central bank.

The RBI has cut its growth estimate to 6.1% for 2019-20 from the earlier 6.8%. The government has unveiled a series of measures including a sharp cut in corporate tax rates to revive growth and has promised to do more.

The manufacturing sector declined 1.2% during the month compared with growth of 5.2% in the previous year ago period. This was the first contraction in the sector in the past six months.

The capital goods sector, seen as a key gauge of industrial activity, contracted 21% in August compared with 10.3% growth in the same month a year earlier.

The consumer durables sector declined 9.1% in August compared with growth of 5.5% in August 2018. The infrastructure and construction goods sector contracted 4.5% during the month, against growth of 8% in the same year-earlier month.

In terms of industries, 15 out of the 23 industry groups in the manufacturing sector contracted during August compared with the corresponding month of the previous year.

Economists said they expect the sector to witness a rebound on the back of revival in the rural economy and an upswing in demand due to the measures unveiled by the government.

They also said the dismal factory data may prompt the RBI to go for another interest rate cut when it reviews monetary policy in December. The central bank has unveiled five consecutive rate cuts to revive growth.