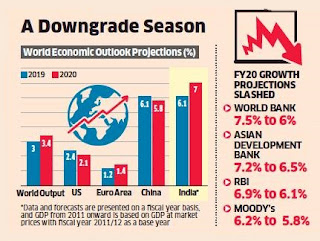 The International Monetary Fund cut its estimate for India’s growth this year to 6.1% from 7% projected in July, calling on the country to use monetary policy and broad-based structural reforms to address cyclical weakness and strengthen confidence.

“India’s economy is set to grow at 6.1% in 2019, picking up to 7% in 2020,” the IMF said in its latest World Economic Outlook, adding that the downward revision reflected a weaker-than-expected outlook for domestic demand.

Forecast for next fiscal has been cut to 7% from 7.2% estimated earlier.

In India, growth has softened on the back of corporate and environmental regulatory uncertainty with concerns about the health of the nonbank financial sector further weighing in, the IMF said in World Economic Outlook: Global Manufacturing Downturn, Rising Trade Barriers.

Most agencies have cut growth estimates for India in view of the slowdown. RBI lowered its growth projection for the fiscal year to 6.1% from 6.9%. The World Bank on Sunday lowered its forecast for the current fiscal year to 6%, down from 7.5% in April, and said the main policy challenge for the country is to address the sources of softening private consumption and the structural factors behind weak investment. The Asian Development Bank has lowered its India growth forecast from 7.2% to 6.5%. Ratings agency Moody’s Investors Service last week lowered its growth forecast for India to 5.8% for the current fiscal year from 6.2%.

The economy grew at its slowest pace in six years at 5% in the June quarter. Industrial production contracted 1.1% in August, the worst performance in almost seven years.

This should be supported by subsidy rationalisation and tax-base enhancing measures, along with land and labour reforms.

“Governance of public sector banks and the efficiency of their credit allocation needs strengthening, and the public sector’s role in the financial system needs to be reduced,” it said, adding that reforms to hiring and dismissal regulations would help incentivise job creation and absorb the country’s large demographic dividend. Land reforms should also be enhanced to encourage and expedite infrastructure development, it added.

“Growth will be supported by the lagged effects of monetary policy easing, a reduction in corporate income tax rates, recent measures to address corporate and environmental regulatory uncertainty, and government programmes to support rural consumption,” it said.

To help revive the economy, the central bank has cut rates five times this year and the government has unveiled several measures including a reduction in corporate tax.

Global growth is projected to improve modestly to 3.4% in 2020, a downward revision of 0.1 percentage point from July projections, according to the IMF. Growth in advanced economies is projected to slow to 1.7% in 2019 and 2020, while emerging market and developing economies are projected to experience a growth pickup from 3.9% in 2019 to 4.6% in 2020.

“About half of this is driven by recoveries or shallower recessions in stressed emerging markets, such as Turkey, Argentina, and Iran, and the rest by recoveries in countries where growth slowed significantly in 2019 relative to 2018, such as Brazil, Mexico, India, Russia, and Saudi Arabia,” the IMF said.