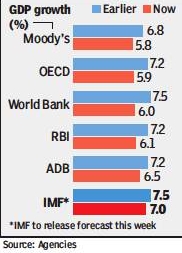 The World Bank sharply lowered India’s economic growth projection for the financial year to 6%, against the original estimate of 7.5%, joining a host of agencies that have downgraded the forecast since the RBI pared its estimate at the start of the month.

India’s growth rate, which was faster than China’s until a few quarters ago, is now expected to be slower than Bangladesh and Nepal, the World Bank said in its report on South Asia, while linking the slowdown in the region to global factors.

In what was a reference to GST, the multilateral agency warned that the challenges with indirect tax reforms, weakness in rural economy and high rate of urban unemployment may also impact the poverty reduction initiative.

The report identified softening consumption due to slow growth in rural incomes, domestic demand and credit from NBFCs as a key challenge. Structural factors behind weak investment was the other concern flagged by the World Bank.

“The remarkable weakness of Indian economic activity during the first half of 2019 is largely driven by external and cyclical factors. However, during this downturn several structural problems have come to the surface. One of these problems is related to vulnerabilities in the financial markets that have constrained credit supply. Financial sector reforms are needed to bring India back to a rapid growth path,” it said. The international agency, however, expected a pick up from the next financial year and estimated that GDP growth would accelerate to 6.9%.