Monsoon begins its most delayed retreat in 59 yrs 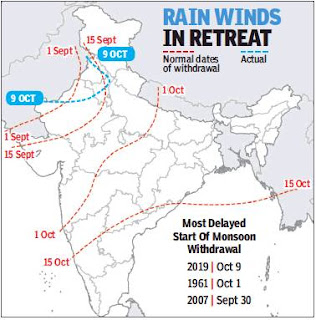 The southwest monsoon finally began its retreat from the country, nearly 40 days later than the normal date, in what is by far the most delayed monsoon withdrawal in met department records going back to 1960.

The India Meteorological Department declared that monsoon had withdrawn from parts of Punjab, Haryana and north Rajasthan on Wednesday. From here on, monsoon is likely to make a swift retreat from north and central India, it said. The most delayed monsoon withdrawal recorded before this year was in 1961, when the monsoon began its retreat on October 1. This year, active conditions till late in the season, including a low pressure system that came in from Bay of Bengal in September end, kept monsoon going.

“The reversal of wind direction may reduce humidity and lead to a drop in temperatures in north India,” Mohapatra said. The monsoon typically begins to withdraw from west Rajasthan, retreating incrementally from the north and then central India in a process spread over a month-and-a-half.