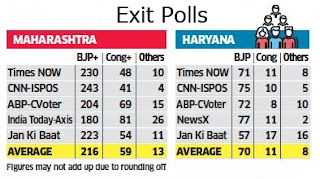 Exit polls have predicted a resounding victory for the Bharatiya Janata Party in both Maharashtra and Haryana. Most polls have given nearly three-fourths majority to the ruling BJP-Shiv Sena combine in Maharashtra, and a similar margin to the BJP in Haryana.

By this count, incumbents Devendra Fadnavis and Manohar Lal are on course for second terms as chief ministers in their respective states.

In Maharashtra, the range for BJP-Shiv Sena oscillated from a maximum of 243 seats to a minimum of 180, comfortably above the halfway mark of 144. In Haryana, most polls gave the BJP more than 70 seats in a House of 90.

The BJP would see these projections as a big public endorsement of key decisions such as the withdrawal of Article 370 from J&K and the aggressive approach towards Pakistan.

Going by the exit poll projections for Maharashtra, the BJP-Sena strategy to campaign on the twin planks of nationalism and the administrative record of its state seems to have paid off. Besides Article 370, this would include raising the emotive issue of promising Bharat Ratna to VD Savarkar.

Some opinion polls showed Sharad Pawarled NCP overtaking the Congress. It was evident during campaigning — which saw Pawar launching an all-out charge given his high stakes in the polls — that the listless canvassing by ally Congress was proving to be a drag on NCP’s efforts. Exit polls appear to be indicating that possibility.

In Haryana, the exit polls indicate the BJP may have succeeded in making an impact through its campaign on Article 370 and a corruption-free government in the state. Manohar Lal getting a second term would signal a major shift in Haryana politics, making him the first non-Jat to be elected chief minister for consecutive terms.

At least three exit polls predicted three-fourths majority for the BJP in Haryana, with Congress finishing a poor second. Jatcentric parties — INLD and Jannayak Janta Party — appear to have been decimated.

The exit polls indicate the BJP has come close to replicating its performance in the 2019 general elections. Results for the elections will be declared on Thursday.