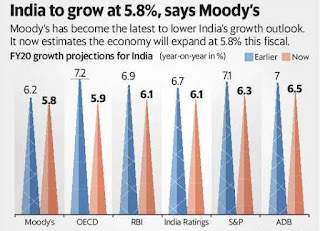 This is the sharpest cut in growth estimates by the agency. The RBI slashed its GDP growth estimate for 2019-20 to 6.1% from 6.8%, also its sharpest reduction in nearly seven years. Several other multilateral agencies have also cut the country’s growth projection against the backdrop of the slowdown that has gripped Asia’s third-largest economy. Growth slowed to an over six year low of 5% in the April-June, prompting the government to unveil a series of measures to lift economic activity and push expansion.

“Compared with only two years ago, the probability of sustained real GDP growth at or above 8% has significantly diminished,” said Moody’s, which has a Baa2 rating with a stable outlook.

Prolonged softer growth would dampen prospects for the government’s fiscal consolidation plans and hamper its ability to prevent a rise in the debt burden. Given India’s already weak fiscal position, this would weigh on the sovereign credit profile, the agency said in a report.

Moody’s also expects fiscal deficit to widen from current target of 3.3% of GDP due to sharp cut in corporate tax rate.

“With the recently announced corporate tax cuts and lower nominal GDP growth, we now expect a central government deficit of 3.7% of GDP in fiscal 2019, marking a 0.4 percentage point slippage from its target,” Moody’s said.