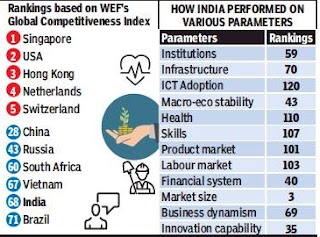 India slipped 10 places to the 68th rank in the World Economic Forum’s Global Competitiveness Index on account of a marginal decrease in its score and a significant improvement in case of others. In the global rankings, Singapore pipped the US to emerge at the top of the index, with Hong Kong moving up four places to be placed third. Among BRIC countries, only Brazil ranked lower than India, while Argentina was the other country among the G20 nations that is placed lower.

What was more worrisome is that on five parameters — ICT adoption, health, skills, product market and labour market — India ended up beyond the 100th place in the rankings that covered 141 countries. Only on four pillars it is among the top five countries — market size, innovation capability, financial system and macro-economic stability. Of the dozen factors on which countries are ranked, India had the highest score in market size, where it was ranked third.

The report noted that the country’s financial sector is relatively deep and stable, despite the high delinquency rate of 10% of the loan portfolio, which contributes to weakening of the soundness of its banking system.

“India performs well when it comes to innovation, well ahead of most emerging economies and on par with several advanced economies. This contrasts with major shortcomings in some of the basic enablers of competitiveness,” the report said.

In fact, India fared well on how fast the legal framework is adapting to digital business models such as ecommerce, sharing economy as well as fintech — ahead of countries such as Japan, Korea, Australia and France, according to the report.

But it pointed to gaps in the labour market. “As innovation capacity grows in emerging economies such as China, India and Brazil, they need to strengthen their skills and labour market to minimise risks of negative social spillovers. As innovation crosses borders, even countries with low innovation capability will need talent adaptability, making human capital investments one of the most critical factors of productivity in the coming decade,” the WEF report said.