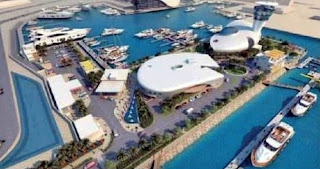 After several years of delay, the state environment department has cleared the construction of a marina at Belapur in Navi Mumbai. This will be the first in the Mumbai Metropolitan Region.

The one planned at Gateway of India was opposed by the Western Naval Command for being a threat to its base. Another marina was planned between Gateway of India and Apollo Bunder, but it never took off.

The City Industrial Development Corporation planned to build its own marina at Belapur in 2011-12. The land for the project is being developed by CIDCO and Maharashtra Maritime Board, who have entrusted a private firm, SHO Marina, with its implementation. The firm built a similar facility in Kochi some years ago.

According to sources, the marina will have parking facility for boats and vessels and also workshops for their maintenance. CIDCO and MMB have also planned a small garden with play area for children. A floating pontoon has also been proposed, but no construction is allowed in the water area, according to the minutes of the meeting recently released by Maharashtra Coastal Zone Management Authority, the body that gives permissions to build such facilities. The body has also transferred seven acres of land to MMB for the purpose.

The MCZMA has also asked for e-toilets and collection of solid waste to be made part of the plan. The body has given strict instructions that no construction material or debris be thrown into the sea. Both MMB and CIDCO have insisted that there must be hotels and restaurants at the marina. They also wanted it to be one of the best in the world, but MCZMA clearly stated that no hotels or restaurants will be allowed as it’s a CRZ 1 (coastal regulation zone) area. The security cabin, storage room, waiting room will be permitted at a distance in the CRZ II area. Though MCZMA has allowed building of a garden, it said that no mangroves must be disturbed.

The project will be implemented in two phases – marina and non-marina activities. While clearances have been given for some, the others are yet to be acquired from the environment ministry. A CIDCO officer, on condition of anonymity, said the project will take at least two years and MMB has agreed to give a 25 per cent revenue share to the development body.